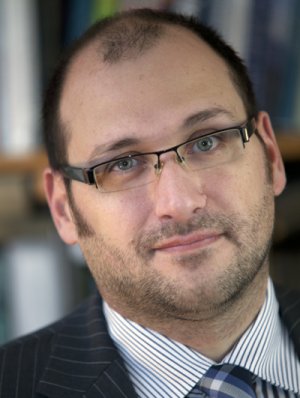 Program Director of the House of Terror Museum

Gábor Tallai is a writer, teacher, literary translator and the programme director of the House of Terror Museum. He was born in 1970 in Germany and he has lived in Hungary since 1980. He graduated from the Teacher Training College of Eötvös Loránd University with degrees in history and Hungarian language and literature and subsequently he gained a scholarship to study media theory and TV journalism in Munich. He worked as a teacher at Berlitz USA from 1995 to 2001 and he also served as deputy head of the cultural desk at the daily Új Magyarország in 1995-1996, then as head of the cultural desk at Napi Magyarország from 1997 and at Magyar Nemzet from 2000. He was appointed as manager of the Hungarian exhibition at the 1999 Frankfurt Book Fair, then, from 2001 to 2003 worked as strategic manager at MTI Hungarian News Agency. He is a founding member of the Association of Young Writers and chairman of the Szépirodalmi Figyelő Foundation. He won the Hajnóczy Péter literary scholarship in 2000. His writings have been printed by several reviews and published a volume of prose with Kortárs publishers in 1997. He plays a leading role in planning the exhibitions, campaigns and events of the Public Foundation that also runs the House of Terror Museum and he is the editor of numerous popular and scientific publications. He has worked on contracts as an advisor to several Hungarian and international advertising companies. His latest work was the script of The Angel of Budapest, a comic book on the 1956 revolution with drawings by Attila Futaki. Gábor Tallai was awarded the civil division of the Knight`s Cross of the Order of Merit of Hungary for his outstanding work.